Unclogging The Toilet Without A Plunger :) 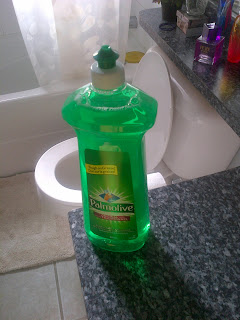 Unclogging The Toilet Without A Plunger

After living with someone for years and now living alone, I’ve finally realized a few things: The garbage doesn’t take itself out, the lawn won’t mow itself, and the toilet surely won’t unclog itself after I dump a weeks worth of leftovers down it. I thought they’d just disappear with the whirl of water like when I normally flush. Not the case.

One might ask why would someone dump a can of whole jalapenos down the drain? It saves me putting them in the trash, which could potentially stink. I don’t want my kitchen to stink!

Although I don’t do my hair in curls, wear makeup or polish what little finger nails I have, I do wear a bra and a lacy thong so I still qualify as a girl. This girl never learned how to plunge a toilet!

This is where WikiHow comes in. Thanks to the women of 1976, I found an instructional video on how to fix my little issue. Here’s what I learned from the video:
A. Wear a head wrap or bandanna
B. Nod your head a lot
C. It could get messy

So here is the easiest way to unclog your toilet. This is the Hot Water and Soap Method.
Im gonna make this real simple...

1. Get a big pot of water, heat it up.  You dont need to boil it but get it piping hot at least.
2. Get some dish soap, sqeeze a few drops of dish soap into the bowl of the toilet thats backed up... and my few drops I squirted out about a quarter cup.
3. Bring the hot pot of water to the toilet, lift the seat and dump all the water down without hesitation.

This should send all the junk swiming down the the drain and you'll be able to flush another weeks worth of left overs and repeat this step to bring your potty back to normal.

So I did this and it worked well.  A week later after an open house I had I realized another toilet (that I never use) was plugged up. Someone had flushed something they shouldn't have?  Now being a master at this I knew exactly what I needed to do and it worked just as well as the first time :)

Summy.B
To give you an idea of who I am, here are a few things about myself: I'm 27, I've been a vegetarian since The day I graduated grade 7 (12yrs old), I am a pescetarianism vegetarian meaning I eat fish and some dairy. When I didn't know how easy googling recipes was I used to eat very poorly and as a result that and other factors led to packing on the pounds and I became a chubby chicky. Through learning how to eat (and still learning every day) plus exercise on a regular basis I am becoming the chicky I actually want to be. Hopefully I can help or inspire someone in my journey and I hope someone enjoys reading my rambles.